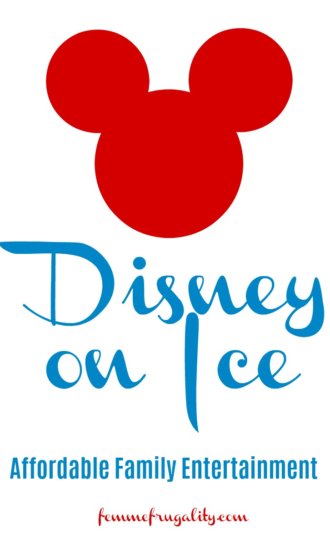 You may remember my shock and disbelief last Fall when I realized that tickets to Disney on Ice are insanely affordable.

Well, last night we got to do it again. We were fortunate enough to have tickets provided to us via Feld Entertainment, but had we not, it would have only been $25/each. I feel like the prices are crazy low compared to other Disney Experiences. Plus, if you have a kid age two or under, they get in for free.

Disney on Ice: Reach for the Stars

The show we saw last night was Reach for the Stars. It was a series of truncated yet visually rich on-ice adaptations of various Disney movies. They were each so well done, touching on the important and exciting parts of each story and incorporating almost every song from each movie featured.

My favorite part was the Little Mermaid segment. Because Ariel has been my favorite since childhood.

That’s not the only reason, though. There was this really insane part when Ariel got her legs–she essentially climbed this rope and did some aerial acrobatics. It was insane–at one point she was spinning up near the rafters holding onto the rope with only her hands.

While it was happening, I was petrified. I was ready to force my hands over my kids’ eyes at any given second in case she fell. But, of course, she didn’t. Because she’s a professional. And when she came down I realized it was one of the most amazing physical feats I had ever seen.

The kids got most excited for Frozen, laughing and dancing during almost the entire segment. Prior to that, my littlest one was partial to the Tangled performance.

But really, all of it was amazing. Disney can definitely put on a good show.

Check Out Disney on Ice Near You

Here in Pittsburgh, there are six more shows of Reach for the Stars before they leave town on the 25th. Highly recommend checking it out.

Reach for the Stars’ next stop is Indiana (the state, not the city here in PA.) However there are a lot of other Disney on Ice shows happening across the country at affordable prices. You can check to see if there’s one near you here.