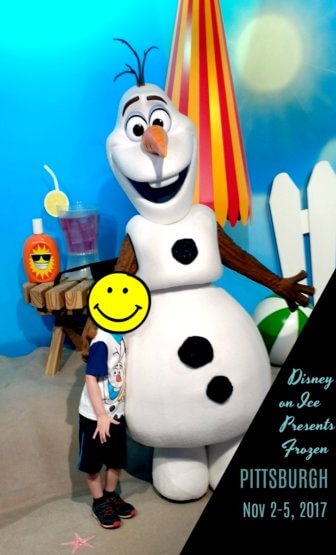 When we went to Disney World earlier this year, one of our favorite attractions was the Frozen performance at Hollywood Studios. A story where fear is overcome by courage and love is just plain winning.

And it’s Disney, so the production value was over the top. Elsa shot magic swirls out of her fingers as she sang her hallmark Let it Go, literally making it snow inside on a hot Florida day in May.

We’re super excited to have the opportunity to view another Frozen production–this time a bit closer to home, and this time, appropriately, on ice.

From November 2 through November 5, 2017, there will be seven performances of Disney on Ice presents Frozen right here in Pittsburgh at PPG Paints Arena. As if the location and content weren’t enough of a reason to get excited, the frugalicious part of you is going to love the price: tickets start at just $15!

Here are the showtimes:

We’re really psyched to see the entire story play out on ice with over-the-top sets and effects (it will be like we’re really in Arendelle!), but on top of Frozen characters like Elsa, Anna, Kristoff, Sven and Olaf, you’ll also see some other Disney characters make an appearance including:

Since the show is only in town for the next few days, you’ll want to hop on purchasing your tickets. You can do so at disneyonice.com or by calling (412) 642-1800.

Have you ever been to a Disney on Ice performance? Or have you been to the Frozen performance in Orlando? Would love to hear more about your experiences in the comments section!

Note: I am receiving free tickets to this event in exchange for promotion and a review.