So in my major we have to record a ton of videos.  We then have to turn them in to our teachers to be graded.  Five years ago this meant VHS tapes.  (DVDs were too expensive to burn a single video to hand in.)  Today that means USB drives.  We all have to label them, turn them in, then sort them out when it’s time to hand them back.  It’s really not that big of a deal in the grand scheme of things, but it’s kind of a pain in the butt.

The other week one of my classmates had one of those bracelets on.  You know, the ones that five years ago would have been only yellow and said, “LIVE STRONG,” on them.  Then she did something amazing.  She took it off her wrist.  Both ends unclasped from each other and revealed a flash drive.  My mind was blown.  Then I saw this Pexagon Technology deal…$25 for $50 worth of product.  And I saw they had these: 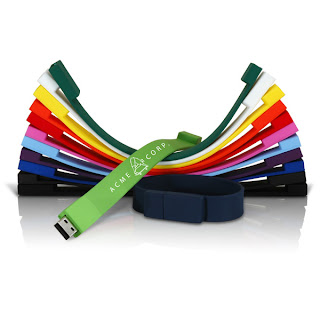 SOLD!  Personalized wristdrives! (I just coined the term as I’m sure that’s not what they’re actually called.)  Where Acme Corp is I could put my name and not worry about putting stupid little pieces of paper and tape all over my tiny drive.  Not a bad price either.  I think 2 GB would be sufficient, so that’s $11.53 plus essentially 50% off so it’s only $5.77 each.  I could get one for each of my classes.  And still have money left over.

So that’s what I’m working on now.  Figuring out what else I want.  There’s tons of stuff and I can put my name on all of it.  There’s an iPhone cover, but my phone isn’t yet out of the 20th century.  There’s picture frames, which I want, but am not sure if I need.  I could always gift them.  I have to get something for Mother’s Day anyways.  There’s external hard drives and these picture storage things.  I could have used those when I did my most recent photo dump onto DVD.  I’m always worried about them getting scratched.    But both of those are a little pricey if I’m getting my wristdrives, which I am.  Decisions, decisions.  If you want to help me, you can click here to see all their stuff.

If you want the deal yourself, you can click on this widget:

*This is an affiliate post.  All opinions are my own.  Good and bad.*

13 thoughts on “"But still I love technology. Always and forever."”