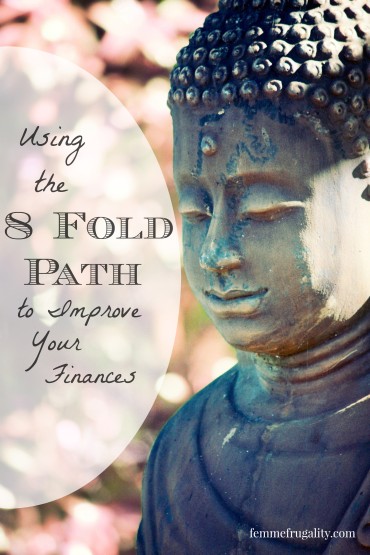 I love exploring different religions, different concepts on how to experience spirituality.  Buddhism  has been on my mind a lot lately, and I couldn’t help but notice the practical applications of its tenets.  They can be applied to almost any area of life, so I thought I’d share my thoughts on how they could be positively applied to finances with you all today:

The 8 Fold Path of Buddhism

The right view encompasses two of the other major tents of Buddhism:  the 3 Marks of Existence and the 4 Noble Truths.  Essentially it means you have to be looking at life out the right window to be able to see the path to happiness.  To orient yourself to that window, you should internalize these beliefs:

The 3 Marks of Existence

Right intention is all about awareness.  Life is suffering, so no matter what we do we will have some kind of suffering.  What we can control is how react to it.  The next time you bust out the plastic, think about why you’re doing it.  Is there some underlying pain you are trying to quell?  Have you fallen victim to advertising overlords?  When you get another bill in the mail that you can’t afford, how to you react to it?  Do you shut down, or do you get motivated to get out there and increase your income?  When your brother comes to you asking for a loan, do you say no because you really don’t have the money, or do you say no because you think you’ll never see it back?  (I’m all about gifting money whenever someone asks for a loan.  If I have it to loan, I have it to give.  If I can’t give it then I really don’t have enough, though I’ll try to find another way to help out.)

[Tweet “No matter what we do, we will have suffering. What we can control is our reaction to it.”]

Understanding why we do things reveals our intentions.  Once we’re honest about what those intentions are, we can start to alter them and put them into alignment with the good, the positive.

We can have all the right intentions, but if we don’t act upon them it really doesn’t matter all that much.  Intending to start saving for retirement isn’t the same as starting today. The world will remind of you of that when you’re 65 and missing out on a ton of interest money you could have had if you had just started 10, 5, 2 years earlier.  Debt doesn’t pay itself off because you meant to.  Those in need don’t have food because you wanted to donate to charity.

There’s another side to this, too.  Acting upon good intentions will make your world and the world of those around you a better place, but not acting on bad intentions can be just as powerful.  Recognizing your intentions are ill-willed can save those around you from a lot of suffering, which falls into the “helping not harming” part of Buddhism.  Are you buying designer clothes because you really want, but don’t need, them? While you make a lot of money and your college-bound kid has no chance of getting any aid?  Recognize that intention for the selfishness that it is, and don’t buy that shirt.  Then reorient your intentions so you can take a positive action, like throwing that money into your 529 plan or ESA.

This post will be continued in Part 2 next Monday….

20 thoughts on “Buddhism and Finances”