I love ceremony.  It’s the reason I’m walking at my graduation in May, despite the costs I’ll have to pay.  So it should go without saying that when it comes to kiddos, I love baby showers and a good old-fashioned birth announcement.

Purchasing invitations and announcements can really add up, especially if you want to include photos (which I always do,) but if you’re willing to look hard enough, you don’t have to forgo them.  The internet has really helped our family out in that regard.

For example, Vistaprints is a pretty big company that prints a ton of different items, including those invitations and announcements.  Their prices are decent, but when you use Vistaprint Deals the prices become fantastic. 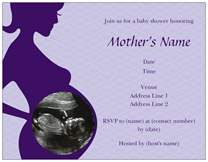 I’m seriously flipping out over how cute this is.  It’s gender neutral, which is great for those who haven’t found out, but if you have and you want gender specific gifts you can easily mention the sex in the invite.  Usually these invites are 10/$7.99, but with the deal they’re only $3.99.  So if you’re inviting 50 people, it’s only $19.95.  That’s cheaper than buying generic box invitations for sure.  Heck, it’s even cheaper than making your own.
Exhibit B 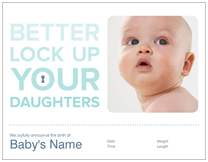 I’m in love with this one, too.  It’s inappropriate, but still seriously cute.  I’m not going to lie; when I got birth announcements I ordered them from another site. I was happy with the quality, but the designs I could pick within my budget were pseudo-limited.  I ended up getting 100 for about $80.  This one?  Using the deal site, my order would have only been $39.90.  That’s 50% of what I actually paid.
Don’t like my taste?  There’s HUNDREDS of designs.  Some of them use photos, some of them don’t.  And tons of other products, even.  Oh, and new customers get up to 50% off.  AMAZING.
*This is a sponsored post.  All opinions are unabashedly and 100% my own.*