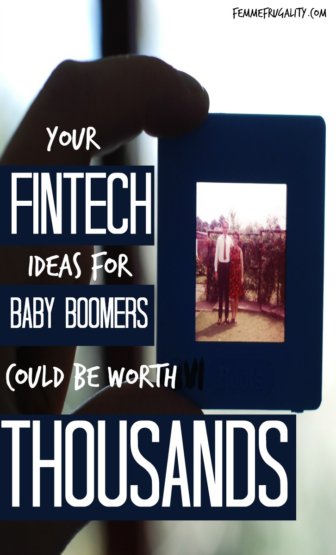 Largely, FinTech is aimed at millennials. It makes sense. We were the first generation raised with the internet, so we’re tech savvy. We also tend to be fiercely brand loyal. We’re a generation that makes up a quarter of the population, and we haven’t even reached our peak earning years yet. We’re good for quick wins, but also great for the long-game if we can be secured as customers today while we’re still working on amassing our wealth.

However, nearly a whole other quarter of the population, with less than one million fewer people, controls 70% of this country’s disposable income. They’re older, though, and therefore not seen as the same quick win as millennials in the tech sector.

These people are baby boomers, and despite being the largest generation at their peak, they have ended up largely under-served by the FinTech community. Creating apps and platforms for people who didn’t grow up with technology is more challenging and not perceived to be as sexy. But there are dollars to be made, and solutions to be created.

Serving the under-served baby boomers means coming up with creative and intuitive FinTech that addresses the unique financial situations boomers find themselves in. These include:

My list is by no means all-inclusive. There are other issues this generation faces financially. There are additional solutions that need to be created.

Your Creativity Could Earn You Mad Cash

There is a need for creativity to solve these problems, but knowing how to code an app isn’t a requisite for dreaming up creative solutions.

CO-OP Financial Services recognizes that need, and recognizes that this generation remains largely under-served. That’s why they’ve put together The Financial Longevity Challenge. The challenge invites everyone, techy or not, to submit their creative, technology-based solutions to some of the financial hurdles boomers face.

Have an idea? If yours is chosen as one of the best, you’ll get to split a $10,000 prize with other thought leaders. There can be up to five winners, meaning the prize will be $2,000 at least, but that’s only if there are five worthy ideas. You could end up winning more.

If you want to participate, be sure to get your idea in by November 27th.

UPDATE! This year’s top ideas have been chosen! There were five of them, and they were pretty phenomenal, addressing a wide range of issues:

Idea: This initiative seeks to help those over 50 who are looking to relocate or change their living situation to reflect their current life circumstances. Through a web and mobile platform, “Rightsize” will help users develop their ideas about retirement, housing and lifestyle and transition them into reality. Users are able to build a fiscal profile and check in with a self-guided map, get relevant information from the news and other users, as well as connect to resources and services.

The “Not So Retired Life” Podcast

Idea: This initiative seeks to empower individuals over 50 years old to re-frame the way they approach retirement so they can live a long, fulfilling life, in a financially-sustainable way. This proposed podcast will share stories of the real experiences of people in their late careers/early retirement. The plan calls for leveraging local journalists, entrepreneurs, credit-unions, and/or communities to find initial sponsors and interviewers.

Idea: The Friendly ATM will give credit union members more confidence when using ATMs by allowing them to take time when setting up transaction details while they are at home. Once transactions details are confirmed, the transaction will be automatically brought up then next time the user logs-in to an ATM. This will minimize the time that credit union members spend in being vulnerable at physical ATM locations.

Idea: This initiative seeks to create personal pension products for individuals and distribute them via credit unions. It will support the dreams and obligations of 50-plus consumers by creating a steady income stream from their earlier savings. It will leverage the credit union client relationships and physical distribution network to offer individualized pension plans at scale.

Originator: Lillian J. Warner, New York, New York. Warner is among a team of graduate students from New York University, under the tutelage of Anne-Laure Fayard, Associate Professor of Management in the Department of Technology Management and Innovation.

Idea: This team proposes an “incubator” for credit union members over 50, where they can pursue their small business dreams and connect with their community. In this way, people in this age group can remain active, develop a project they always wanted to work on and help someone by providing expertise. The club will provide support, resources and networking opportunities to its members.

What do you guys think? Have a favorite?

If you’re bummed that you missed it, no worries. This contest has been going on since 2011, so I’m willing to bet it will be around next year, too. Keep an eye out for it in the Fall!