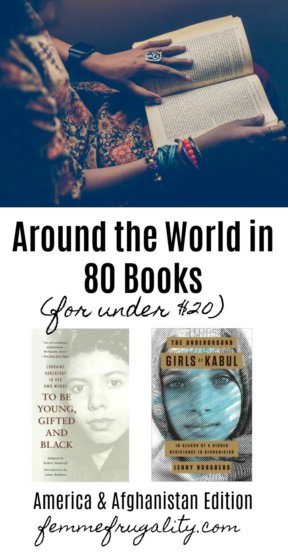 Here’s my running tally so far:

I haven’t done one of these in a while. I keep getting stuck about halfway through a book, and can’t get myself to commit to finishing–even though that’s my usual practice. While I wasn’t very good at this challenge in 2017, I did read and review some other great books, like Broke Millennial, Make Your Kid a Money Genius and How to Hire a Nanny.

Since it’s been six months, you may not remember that I incurred some late fees on the books from Austria and Mali. My librarians know me pretty well, and they made the generous move of forgiving them for me without me asking. Lucky me! I acquired this memoir-like play from my library last summer. Our family participates in the summer reading program every year, and I got to pick a free book as a reward for that participation.

It took me a while to get to this one. Like I said, I had several books I was halfway through, and wanted to finish them before picking up a new tome.

Because when I finally picked this one up, I realized Lorraine Hansberry is one of my favorite writers ever. Period. The end.

Hansberry was the playwright behind A Raisin in the Sun. Her success gave her a platform, which she used for activism and encouraging other authors. She was contemporary with MLK, Jr., whom she respected, but also saw as only one part of the solution. Nonviolence was not going to make racial discrimination go away on its own.

Hansberry died in her early 30s as a result of cancer. She had several half-written works which were compiled, along with some of her letters and journal entries, to create this play. It’s phenomenal.

It was alarming how many of her words are still pressingly relevant today. I was struck by certain passages, receiving confirmation of a message I’ve heard time and time again: things are better today than they’ve been before, but the amount of progress we’ve made in our country is small. And we need to do better. Starting yesterday.

I looked for a version of To Be Young, Gifted and Black on YouTube, but only got clips and pieces. Then I got on Twitter and saw #LorraineHansberry trending. I thought maybe Twitter was getting all creepy on me like Google does, but when I checked it out, I saw that PBS had just aired a documentary about Hansberry that night. I missed it, but I’m looking forward to catching up on it. It was apparently pretty powerful. I started this challenge after seeing it on Savvy Working Gal years ago. One of her first reads was The Underground Girls of Kabul, and I have been wanting to read it ever since. I finally hit it last summer, right before the spell of books I got halfway through. I usually like to tell you about two books at a time, so I’ve held onto the review until now.

Jenny Nordberg is American. She went to Afghanistan for another story, but happened upon something fascinating while she was there: the woman she was covering had three daughters–but one of them dressed up as a boy on a regular basis. This way, the child could escort their sisters to school, go to work and give the family a bit of an elevated status.

Nordberg found out that not only was it not unusual that the family engaged in this practice, but that it was actually a cultural norm throughout Afghanistan. It even has a name: bacha posh.

But people were reluctant to talk about bacha posh. It was accepted as a regular practice, but also a private family decision that you shouldn’t pry into.

Nordberg questioned whether this practice was child abuse. You raise a girl as a boy for so long, and then once they hit puberty they have to switch their gender identity; they may be in real physical danger if they continue to empower themselves by not meeting cultural gender norms at this point.

I…really don’t think it’s child abuse. One of the people she interviewed called her out on it in this way:

Why does it matter if a child dresses like a girl or a boy? Westerners oversexualize their children.

^Truth. In the words of RuPaul, “We’re all born naked and the rest is drag.”

Granted, girls and women are oversexualized in general, leading to their oppression in the society Nordberg studied.

17 thoughts on “Around the World in 80 Books: Afghanistan & America”