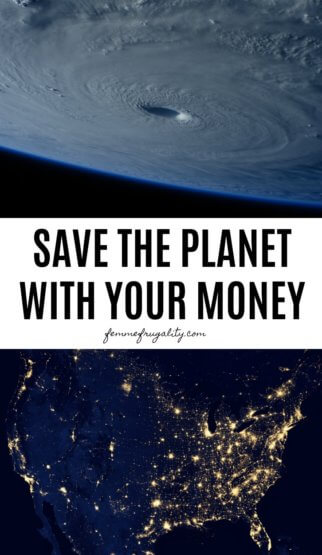 As I write, a massive front is passing over the Arctic, bringing the warmest temperatures ever recorded to the region. Meanwhile, Europe is freezing.

Our planet is not messing around. And these are just harbingers of things to come.

How can I save the planet?

I have agonized over this very question for years. Yes, you can recycle. Compost. Drive less. Try to give up your car altogether.

But these things either add up to so very little or are so insanely difficult that they’re discouraging. In the end, you feel like you’re doing nothing.

In my quest to do better, bigger things, I’ve stumbled upon a few reasonable and higher-impact steps we can all take as average, everyday consumers to help save the planet–with our money.

Get Green Energy for Your Home

Obviously, if you’re a homeowner, you can invest in some solar panels. If that upfront investment is too large, though, you can also rent them. The company installs the panels for free, and then charges you an agreed upon monthly premium for the energy and panels themselves. In the end, the costs come out not as dissimilar as you’d imagine.

Not a homeowner? Me, either. But you can still go green with your energy. Many states will let you choose who produces your energy, and some of those energy providers are 100% green. For example, my energy provider uses solar and wind  energy harvested from local farms to power my apartment.

I pay a very slight premium for this–between $10-$20/month more than what my electric bill would have been otherwise. (I don’t have gas in my apartment.)

However, I have had some readers tell me that in their region, switching to a green energy provider actually saved them money.

If you’re building your own home, you should take the structure’s carbon footprint into account. We now have the technology and means to build carbon negative buildings. That means the buildings not only don’t put anything bad into the environment, but they also suck up some of the nasty carbon that others are putting into the atmosphere.

You don’t have to build a cobb house or build underground to be green. I had the pleasure of visiting one of these carbon negative buildings, and it looked and functioned just like any other building. There was electricity. AC. Four square walls. Running water.

There were gardens on the roof, but other than that, as a visitor you wouldn’t know it was a green building unless you were told.

If you’re going to invest money into building a new home anyways, there are ways to do so and give more to the planet than an Energy Star fridge.

And/or maybe you want to invest only in companies that are taking massive steps to reduce their carbon footprint.

SRI is not without controversy. Even though you can purchase SRI index funds, the fact that someone is making moral decisions before including a stock in the fund indicates to some investors that these funds are actively managed–which is typically not a good thing when we’re talking about investing.

But here’s the question:

At the end of the day, are you comfortable investing in companies that are killing the planet just so you can get a bigger return on your investment?

And a followup question:

What good is your money going to do you if your habitat becomes unlivable?

By investing in companies actively working to do better, you’re voting with your wallet for companies that are actually responsible. And when money speaks, it is heard.

Vote with Your Wallet

Investing isn’t the only place you can vote with your wallet. You can support companies making green efforts by evaluating where you shop and what you buy on a day-to-day basis.

A lot of companies will market themselves as green in order to attract customers, but not all of them are committing in a way that matches their words. A good place to find larger brands who are actually trying is the World Wildlife Fund (WWF)’s Power Forward report. Here, companies’ efforts are rated on science rather than marketing.

There is a lot of economic pressure to destroy rainforests–the lungs of our planet which consume carbon dioxide and breathe out oxygen. These habitats are so important to all of us, can help filter out all the ill crap we put into the air, and have been on the decline for decades thanks to deforestation.

The pressure comes from the fact that the people living in these regions can make a lot of money off of selling the natural resources forests provide.

For example, the tiny country of Bhutan does a great service to the world by preserving its rainforest and providing water to one-fifth of the world. The country isn’t just carbon neutral–it’s carbon negative.

It has a plan to continue doing that–to continue keeping global warming at bay for as long as possible for the rest of us–but there’s one problem: their economy doesn’t produce the capital they need to continue their work.

So they’re raising money through the WWF. Donate.

There are other efforts to pay people to not sell these natural resources–to fiscally reward them to conserve the environment even when doing the opposite would be quite profitable. These are called carbon offsets.

Carbon offsets have a history of being shady; maybe the money you’re donating is going to the right place, or maybe it isn’t. That makes it important to work with an organization you trust before purchasing one of these offsets.

A great place to find legitimate carbon offsets is this list compiled by Climate Action Reserve.

What are you doing to help save the planet? Leave your answers in the comments!