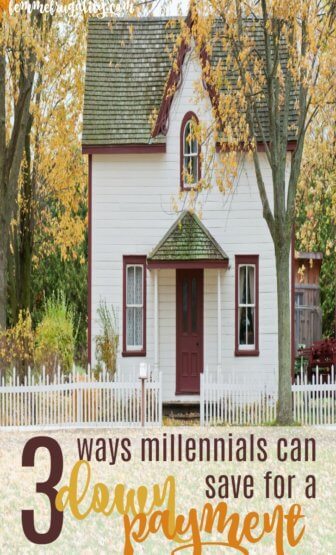 Guys, something amazing is happening.

Millennials are actually starting to enter the housing market.

I’m a millennial that has been trying to get in on housing market for a while. We’ve been saving. Then we looked. And we realized that we actually needed more money than we thought we did to get something we could live with. So we started saving again.

It worked out. Our kids’ educational costs are covered for a while, and hopefully we’ll have enough cash on hand to make the right purchase when we’re ready–which we’re hoping will be soon.

In the meantime, I’ve been thinking a lot about different ways to find money for a down payment and closing costs—without going to the Bank of Mom and Dad. Because let’s face it: for most of us, there is no such thing.

The average cost of a wedding is $35,329. That number can more than double if you’re in one of our nation’s largest cities.

On both of my weddings, I spent about $32,000 less than that. One was big, and the other was decidedly small.

If you’re financing a $35,000 wedding, maybe don’t do that if you want to buy a home in the near future. It will increase your debt-to-income ratio, and make it harder to qualify for a loan on a home you’d be happy with.

I’m not saying you can’t have a beautiful day, though. Here are some wedding savings hacks that will help you pocket more cash so you and your hunny can get into your own home faster:

When I started blogging six years ago, there was this amazing blogger named Lindy Mint who was paying off her debt by selling her old stuff. She and her husband were literally going through stacks of old DVDs and books, and finding other odds and ends around the house to sell for cash.

It worked. If memory serves, they paid off over $5,000 in debt in a very short period of time just by listing stuff on Amazon, eBay and Craigslist.

Six years later, there’s even more diversity in reselling platforms. If you want to buy a house anyway, you’re going to have to move. And moving more stuff than you have to stinks.

Pretend you’re packing up now, and start selling all that junk that you don’t need or use anymore. If you go at it like Lindy did, you may be surprised at yourself and find thousands of dollars in your bank account.

2017 is the best year for summer concerts in Pittsburgh that I’ve seen in at least a decade.

Initially, I was insanely tempted to go to all of them. But I ran the numbers, and that was going to get expensive quick. I put my disappointment on the shelf, and looked instead at all the amazing free things there are to do in my city. If I put the money I was going to be spending on concerts towards our down payment and closing costs, I’ll have a nice chunk of change towards our goal.

Entertainment for me doesn’t just include summer concerts, though. It also includes things like going to the movies, eating out and going out with friends. I’m a veteran to this frugal thing, so let me give you some alternatives that will help you save money while still having a great time living your life:

Saving for a huge goal that can be tens of thousands of dollars is intimidating. But you’ve got this. You’re capable. And when you put your mind to something, you’ll find creative ways to make it happen, even if you hit speed bumps along the way. When you’re ready to purchase a home, head to a financial institution who will have your back through the whole process.

6 thoughts on “3 Ways to Get Money for Down Payment”