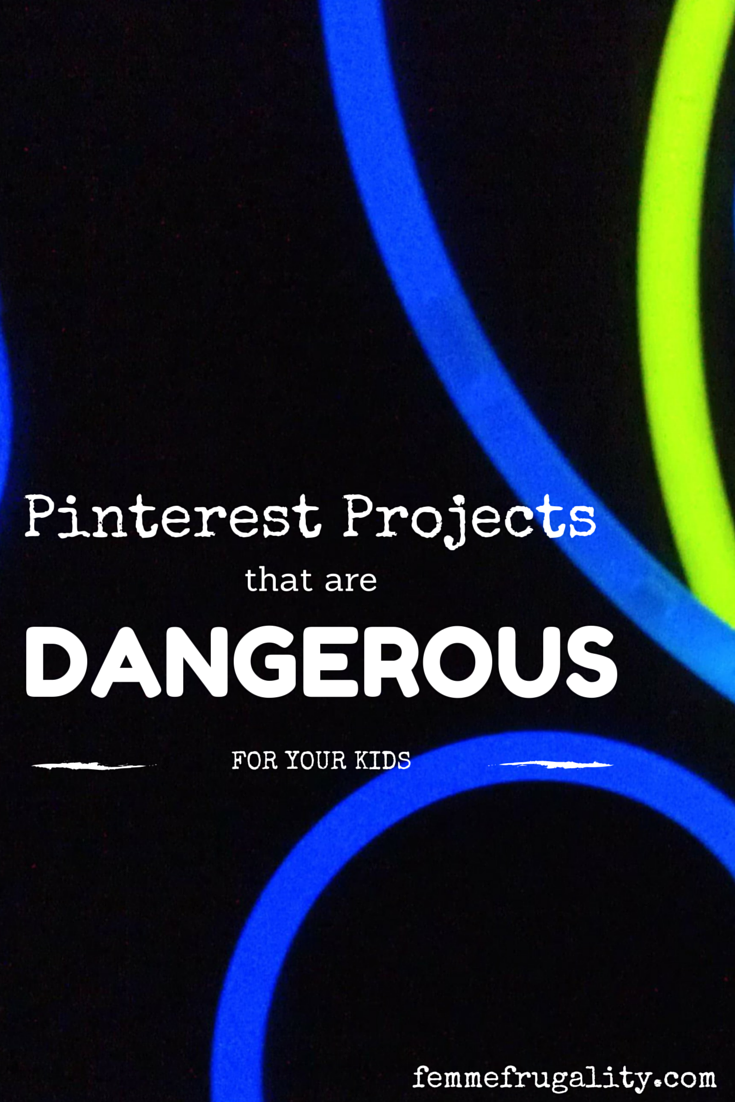 Sometimes we read things on the internet that seem genius.  They look really cool, and we’re sure our kids will love them.  We pin away and just trust that everything we’re seeing is safe.  Why wouldn’t it be?

They wouldn’t be safe because people can be dumb.  Sometimes doing dumb things looks really cool.  But that doesn’t mean they’re smart.  Here’s three Pinterest Projects that are dangerous for your child, as amazing as they may sound:

I have seen countless pins from a variety of different blogs for gooey, ooey slime.  It comes in all different colors. Some have glitter.  Some turn it into Flubber. It looks like Gak from back in the day only cooler.  And homemade!

But just because you make something at home doesn’t mean it’s safe.  Almost every recipe I’ve seen for this slime has contained one thing that should throw a red flag for any parent:  borax.

Borax is a poison, people.  When refined into boric acid, it’s used to kill pests.  It’s sometimes used to clean “naturally,” but people use bleach to clean and you wouldn’t give that to your kid, either.  It’s known to cause skin and respiratory problems after short-term exposure, and long-term it can cause problems with reproductive organs.

That’s all scary, but here’s the real kicker:  if it’s ingested, it can be fatal, especially for children.  If it doesn’t kill you, it can make you very, very sick.  We’re talking effects on the kidney, liver, and goodness knows what else.

So that’s something to think about before you give a child some gooey oeey poison slime that you just created on your stove top.

2.  Glow Sticks In the Bathtub!

Who wouldn’t want to take a glow in the dark bath?  It sounds like an amazing idea and a super fun activity for little ones, until you think about how you do it.  You’re supposed to open up a glow stick and pour the chemicals into the tub.

WHAT?!?! I don’t know how people actually do this without thinking twice.  The water in the tub may dilute the chemicals, but the chemicals are still there.  Inside glow sticks are chemicals that are known to burn the throat, mouth, and eyes, and can cause skin irritation.  If you have exposure to these chemicals, you’re supposed to call poison control.  And if you get them in your eye, you’re supposed to call poison control and  irrigate the eye for 10 minutes.  Have you ever tried irrigating a kid’s eye for one minute?  I’m willing to bet it’s impossible.  Now multiply impossible times ten.

To top it all off, some glow sticks have glass tubes that separate two chemicals inside the plastic coating.  When you bend them, you’re breaking the glass that separates the two, allowing them to interact with each other.  This is what causes the glowing.  So when you’re dumping the glow-y liquid into the tub, odds are you’re dumping tiny shards of glass into the water, too.

This one just seems like bad news for anyone, especially if you have kids in the house.  The frugal blogger in me wonders how much money these people are gluing to the floor instead of investing into their 401k, and the logical person in me wonders why anyone would line a wall or floor of their home with a conductor of electricity.

Maybe I’m paranoid because my childhood home once got hit by lightning.  Right before someone stepped into the shower.  Thank God it didn’t happen two seconds later.  But what if the bathroom floor had been lined with copper pennies?

Make Your Home a Safe One.

There are plenty of amazing, super cool NON-TOXIC toys, arts and crafts supplies, and flooring sold at a retailer near you.  Buy them.  Whatever your savings would have been by making something at home is not worth it.

Use your brain before doing something just because it looks cool.  Keep your family safe before giving them a Pinterest-perfect life, because that “perfect” life may just be hazardous to their health and safety.

Have you seen any Pinterest projects that struck you as dangerous?